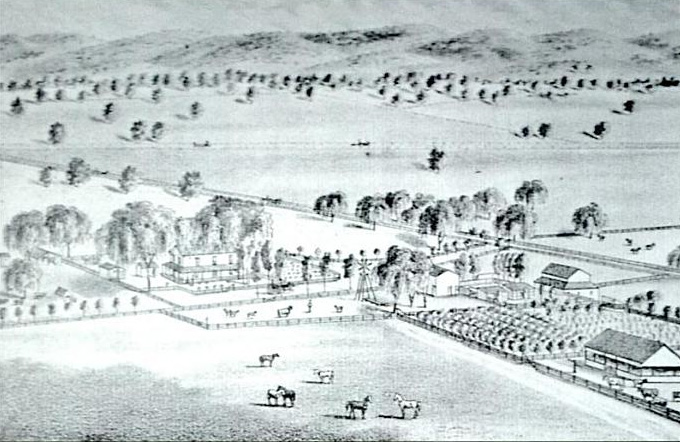 For nearly two centuries prior to the development of the Woodlands, this area had been relatively open land used for various types of farming activities. During the first half of the 20th century, most of the area had become Walnut orchards. In 1961 and 1962, housing development  planning for the area was just getting started. Several developers, including Middlefield, MacKay and Hofman, were the first to approach the City of Walnut Creek to create the “Woodlands”. Once started the Woodlands area changed forever from basically farmland and walnut groves into an urban community.

Back in the ‘50s and early ‘60s our Woodlands was for the most part farmland. In the ‘60s there was a lumber yard where the Nob Hill store is today. The Walnut Creek library and the local museums have drawings and etchings of this area dated from the early to mid-1800s. See the etching above, looking down at Oak Grove Road in the foreground with the Ygnacio Valley Road starting from the right leading toward the left off to the hills.  It shows the residence and farm yards of William C. Prince of Ygnacio Valley located roughly where Banyan Circle is located in the Woodlands today. A Google search came up with photos of his family and other etchings of the “Woodlands” farm.

Back in this era, there were daily stage coaches running from here to the delta that followed a very dusty and sometimes very muddy Ygnacio Calley Road right past where our Cabana Club is located today. By looking at the etching, you can imagine livestock grazing at Valle Verde as well as right on your own lawn!

Our newsletters have often mentioned “Hofmann” homes, but we were reminded by  one of the original owners in the Woodlands that not all of the homes were built by the Hofmann company. We checked with the city records and the majority of the homes in the Woodlands were built by three building companies in the early to late 1960’s. These builders were Middlefield, Hofmann and Mackay. With Hofmann building about 50%, Mackay about 25% and Middlefield about 20%. View our Woodlands Photo Gallery to view original brochures and historical photos from these builders!

We welcome submissions for our website as well as our printed newsletter. Please click here for more information.